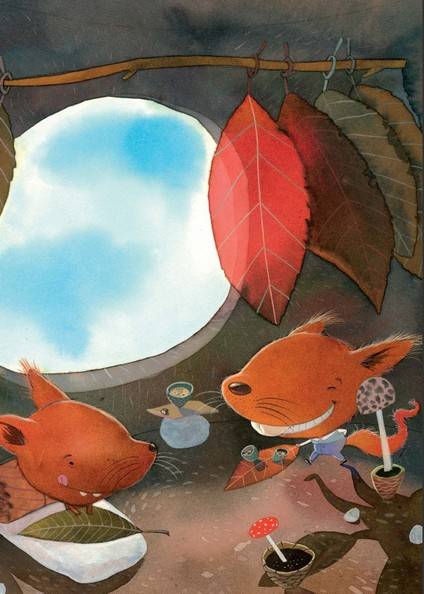 Toothy and Coney were two small squirrels living in the same hollow. They were also best friends. For example, if Coney grew thirsty during the night, all he had to do was say: "Thiiirsty!" and Toothy would jump. He would climb down the tree trunk and go to the little stream which flowed nearby and bring Coney a drink of fresh water in a nutshell. After that, Toothy would usually be thirsty as well, and would start to moan.

Coney, of course, was happy to get up and fetch some water for his friend. He didn't worry about it making him thirsty again, because Toothy would immediately go back to the stream to bring back some more water. They sometimes spent the whole night taking turns to do each other such favours, because they were such nice squirrels.

They also brought each other breakfast in bed, made each other excellent acorn coffee, and pampered each other with small pieces of hazel nut dipped in honey. When they couldn't eat anymore, they squirreled.

An ignorant onlooker would say that they chased each other on trees, threw branches at each other and, screaming, tugged each other by the tail - in fact, that they were childish. Wrong! Toothy and Coney took their squirreling very seriously. Besides, they didn't just throw twigs at each other, but also husks. If they were happy, they would throw some at the wolf and fox waiting down in the bushes for careless little rabbits.

"Oh, so have I," said Coney, who at first was afraid of staying alone.

"You know," continued Toothy, "I've found an empty hollow in a tree. Aunt Woodpecker who now lives with Uncle Woodpecker used to live there. Unfortunately, the hollow is slightly smaller than ours, and there will hardly be room enough for me."

At first Coney was sad, but he soon got used to the idea of Toothy moving out. It was true that the squirrels' hollow had been getting smaller recently, because the squirrels were growing. And though they were still cute furry little creatures, they occasionally bumped into each other with their little noses, or scratched each other with their small claws. Toothy's departure was quite a smart decision.

He didn't move far away at all. He visited Coney almost every day. They squirreled, enjoyed their lunch, and everything was much the same as before.

"Toothy, I remembered something," Coney once remarked. "I'm not saying that I mind you visiting me so often, but perhaps for a change I should visit you tomorrow. I don't even know what your hollow is like!"

Toothy agreed. They quickly decided that the next party would be at his place.

Coney looked forward to his visit. He had slowly become fed up with Toothy eating all of his supplies of hazelnut during his visits. Friends or not, he had never brought even one hazelnut with him. He decided to bring some other squirrels with him to help finish off Toothy's supplies.

"He probably has loads of nuts, because he can keep everything he finds for himself. And he still comes to my place to eat..." he thought.

When Toothy left, Coney quickly called the messenger Magpie, and asked her to tell all the local squirrels about the party at Toothy's. Because he hardly knew where his friend was now living, he told her that all the squirrels were to meet at his pine tree tomorrow morning, from where they would all go together to visit Toothy.

Early the next morning there were five or six squirrels in front of Toothy’s hollow. Taily was there with his wife. Their children were with them, but they were chasing one another so wildly that it was impossible to count them.

"Great," said Coney, who was glad that they had come, "I suggest we wait for a while, in case someone else turns up ... The more, the merrier!"

Squirrels continued to arrive. But those who were waiting had to be given something. In no time at all, Coney ran out of acorns, which squirrels use to make coffee. Coney therefore sent a few of the youngest squirrels to pick some. The whole group then had to wait for them to return. The guests, by now numbering nearly a hundred, nibbled all of his hazel and beech nuts. There was only his supply of walnuts left. Coney had been saving them for a rainy day.

The young who had gone to pick some beech nuts came back with a full load. They had found many chestnuts, and their mothers began enthusiastically to make a chestnut cake, the favourite squirrel pudding. Coney urged his guests to go to Toothy's home, but it didn't help. No, they said, the chestnut cake must certainly be baked! Toothy will surely be very happy when we bring him a few pieces!

Toothy was already worried because his friend hadn’t yet arrived yet, so he set out on his journey.

"Is something wrong?" he asked Coney, who was approaching him out of the hollow.

"Oh," he moaned, scarcely managing to get out of the way of a bunch of tiny squirrels rolling past him curled up in a ball. "I wanted to bring a few squirrels with me, but somehow everything got out of, em, em, control..."

"Shall we go to the party now?" asked Coney.

"I suggest we have the party right here," said Toothy. "Why would so many squirrels visit me, if I'm already here?" 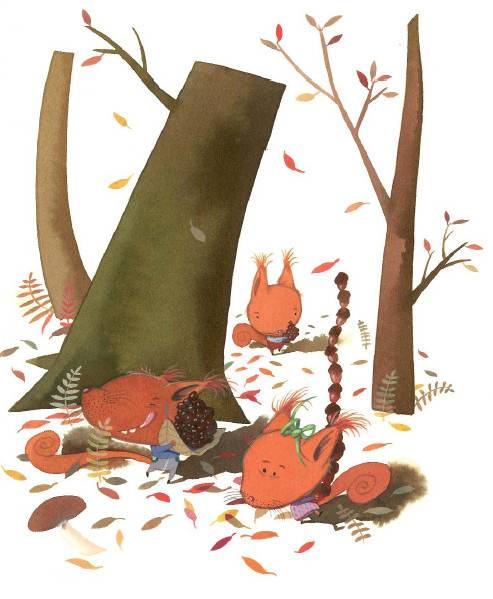 And that's exactly what they did. The squirrel party lasted long into the night. All Coney's food was eaten, even the walnuts which he had been saving for a rainy day. They ate all the edible nuts they could find for far around. All that was left was a large heap of scraps and nut shells.

"What bad luck," said a disappointed Coney the next morning, when he had to squirrel for almost half an hour from his small hollow to find his breakfast.

"I have an empty pantry, and all I wanted to do was show Toothy what it's like to have someone eat everything you have."

However, after a few bites of delicious food which he found a bit later, he began to have happier thoughts.

"Actually I was lucky it was Toothy's party! How dearly I would have paid for it if it had been mine!"

He then began once again to work hard to fill his hollow with new good things. Soon he had completely cheered up! Like any honest squirrel, he was the happiest little creature in the world when he was gathering his food.

This fairytale was published in 2005 as a picturebook Veveričja zabava, written by Tomo Kočar and illustrated by Adriano Janežič. If you need more information, please contact us at: 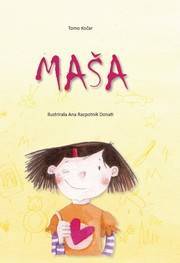 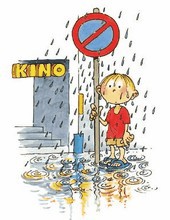